On the West Coast, it is fashionable to be late to everything. People just don't seem to understand how time works. Consequently, when I make appointments with people, I inevitably end up waiting for them, since my Midwest upbringing necessitates that I be at least fifteen minutes early every time. Of course, I never remember to bring a book to read while waiting. Instead, I resort to pressing the happy buttons of my iPhone to view Facebook and kill time. Within seconds, I come across examples of the following and vow to always have a book on me in the future.

Thank Flying Spaghetti Monster Facebook doesn't allow nudity. Otherwise, we'd have to see way too much of our "Friends." Nonetheless, whether they are attention whores or some poor fat slob who just lost two pounds and wants to flaunt it, many people don't seem to have a filter. In a lot of cases, these pictures are the equivalent of the old-fashioned "do you notice anything different about me?" Only, now there is less clothing, and you don't have to point out that you don't in fact notice anything different.

I am well aware that food is required to stay alive, and it is one of the human races' most basic needs. But, you get the most out of food if you eat it, not by posting pictures of it on Facebook. It's really a form of bragging. "Hey, look at this tasty filet mignon I have! Enjoy your tasteless sub there, Jared!" Food pictures are also used by fat people to show they really do just have a thyroid problem: "Here's this delicious and nutritious quinoa salad I made. I don't know why I'm fat." Of course, they don't show you the pound of bacon they use to wash it down.

8. The Most Interesting Man in the World Meme. 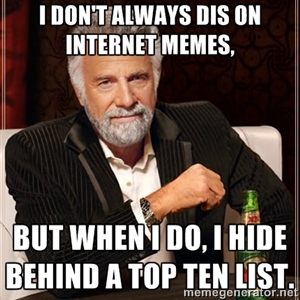 "I don't always ____ , but when I do, I ______________." That's the formula for some people's idea of humor. It is particularly disgusting because it is based off of someone trying to sell something, and it is now officially uninteresting.

Along with pictures of food and near-nude pictures, this is commonly used for bragging purposes. To me, though, all I see is a consumer whore: "Look at what I was able to buy!" Kind of falling within this same category are the posts about what people want to buy. Maybe if you post that you want a Lamborghini a certain number of times, some CEO will shoot one out of his ass for you.

For when you care enough to do the very least. Whether it's sharing an article about how bad global warming is (hint: posting about anything on the internet is worse for the environment than doing nothing) or how we need to stop Obama from taking ours guns, Facebook activists typically do little for their cause. Here's how it works: Jane sees a video or reads an article that leads her to action. Since she is already on Facebook, she posts about it. Thinking that she's done something to help the cause, she can now relax because she's fought the good fight: no need for further action. 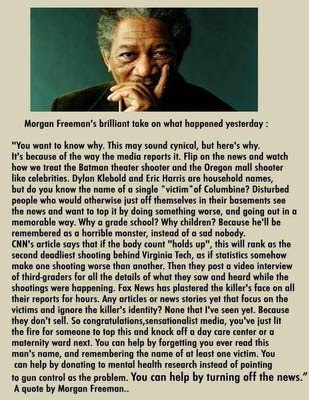 Here's a link you should bookmark and visit before sharing anything that riles you up. It's Snopes. They're pretty good at getting to the bottom of scams and hoaxes, so you don't end up with a jackass like me mocking you. The hoaxes tend to work best on issues that stir people's emotions. When emotions are high, the brain tends to cast off logic in favor of heuristics.

5.a. Chain Facebook Posts - These are hoaxes for even dumber people. They usually play on the religious and are along the lines of "Share this if you are a true believer of Jesus Christ. Do not deny Him like Peter." Pro-tip: God doesn't really care what you share on Facebook. 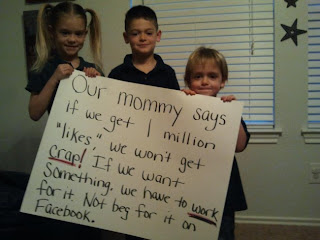 These also tend to fall into the hoax category though not always. Mostly, it's more attention whoring. These annoying posts are typically images of someone holding a sign that says, "If I get One Million "Likes," my friend's wife will blow me" or something to that effect. People actually "Like" and share this stuff!

Game of Thrones, Arrested Development, Breaking Bad, Walking Dead, these are just recent examples of shows that clog the News Feed. I got a pro-tip for you folks. It is really easy to find on-line forums for people who share your fascination for a particular show. Yes, there are more resources out there besides Facebook. I recommend doing a Something search for these forums. Because, the rest of us, your Facebook "friends," all just kind of feel sorry for you.

I only hate this portmantombination slightly less than I hate the practice. Due to various life circumstances, I am friends with a fair amount of teenage girls on Facebook. "Vaguebooking" is a way of life for them. If they are slightly upset about something, one can expect to see a thinly-veiled post trying to draw comments or "Likes" or to just call a bitch out. Stuff like, "U think ur hot shit but u rly aint shit!!!! U wanna see the real bitch look in da meer!!!!" For us adults, it's just a friendly reminder of how batshiat crazy teenagers are.

Looking at my News Feed, it appears I am "friends" with many rail yards-worth of emotional train wrecks. I believe they have all subscribed to the Suicide Prevention Slogan-of-the-Day Club because I see way too many somewhat motivational slogan images. I'm not quite sure why the words can't just stand on their own. Maybe as a society, we've nurtured such a disdain for reading that we now need to put the words on an image if we hope to ever have anyone read them. I don't know. I just know that if I see an image that is predominately covered in words, there's nothing interesting to be gleaned from it.

Well, now that you know how inane your Facebook posts are, hopefully you will step up your game and make your friends' News Feeds more interesting.

And, as always, please let me know what you find annoying about Facebook users below. I'll be sure to pass your gripes along to the proper authorities.
Posted by Lansing Foodies at 4:02 PM

Have Urinal Gum Delivered Straight to Your Inbox: